The Allure of the Cozy

When we started writing STRANGLED BY SILK under the pen name of Barbara Jean Coast, it became apparent to us that it would unfold as a cozy mystery & before long was shaping into a series.  There was so much to tell about our fine people & place that one book would not suffice.

Cozies harken back to Agatha Christie & Ngaio Marsh for the adults & Nancy Drew, Hardy Boys & Enid Blyton stories for the younger set to just name a few.  They’re a gentle read with a sense of humor, quirky characters & bucolic settings.  The reader is spared graphic gory details, lazy use of foul language & explicit sex & are treated to intelligent entertainment & witty dialogue, with a black sense of the human condition in a fun & fast pace.

Currently, there are many great authors of the category, all with their own take & so many really talented ones that it feels difficult to just name a couple — we tried to, but every time we felt that we had left someone out & also publishers of the genre — from independent authors, small presses (such as ours, Cozy Cat Press), & big name established print houses.  Sometimes the sleuth is involved in detective work, but quite often the leads are entrepreneurs, housewives, generally happy folks minding their own business, who have accidentally tripped into a deadly situation, drawing the readers’ curious nature into their lovely worlds of small towns & light romance, set in the past or present.  Cozies are more about the mind behind the murder than the violent act itself & written in such a way that the loyal reader turns into follower by getting so attached to the place & people, & can’t wait for the next tale, a visit into another world.  Often the heroine is a woman, but there are some great new male mystery sleuths rounding out the picture. 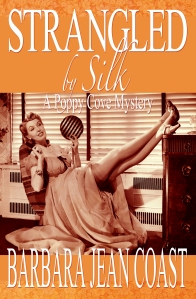 Getting STRANGLED BY SILK published by Cozy Cat press this year was a dream come true.  We feel so honored to have joined the ranks of such fine storytellers in this classic genre.  So pull up a chair, pour yourself a drink & get cozy with one of the many great series out there!