So Who Does Make it A NATE TO REMEMBER, Part Two

Hi there, guys and dolls! A couple of weeks ago, I shared with you a little tidbit about some of the fine Santa Lucians featured in my most recently published Poppy Cove Mystery, A 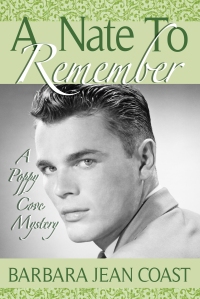 NATE TO REMEMBER. Here are some more fine folks that make the color in my world.

Sophie – the new “French Art Tart” (well, actually the Art Teacher up at Stearns Academy). She has that certain way about her. The wiggle in the walk, the touchy-feely and the accented turn of phrase that keeps all the men running, or so she thinks.

Adonis – Another recent resident, also on the kooky art scene. He likes to think of himself as a Greek God, although the challenges of middle age are taking their toll on this lothario, what with balding and gray hair in a pony tail. He’s a little bohemian and beat, wearing those leather sandals and smoking those funny cigarettes. He thinks Daphne is in fine form, however.

Daphne Huntington-Smythe – one of our beloved Poppy Cove shop owners. The fair haired, carefree Daphne truly feels challenged in her life. Everything has always been so easy and breezy for Santa Lucia’s golden girl, and maybe that’s just the problem. She’s never questioned her choices and when she learns that most of the people around her have lived a more daring and compromising life than her, she feels the itch to do something she might regret, or at least be able to have a secret to privately smile about.

Daniel Henshaw – Daphne’s beau and the Riding Instructor at Stearns Academy. Good old steady Daniel, happy and content in his busy life is at a loss at how to handle Daphne’s urge to rebel. Blissfully unaware of the powers that be in the shape of Sophie, he’s keenly aware of the attentions of Adonis to his girl, knowing that the guy’s intentions are not just for art studies. Daniel does his best to help Daphne feel more like everyone else around her, he plans for their own “day to remember,” which could be more than they both bargained for.

Marjorie Cummings – Head Seamstress at Poppy Cove and the rock the girls rely on. She’s got her own past to tell, and doesn’t hesitate to share it with Margot, just when she needed to hear it the most.

Well, there you have it, friends. Pick up your copy of A NATE TO REMEMBER today (or any of the earlier Poppy Cove Mysteries – STRANGLED BY SILK, DEATH OF A BEAUTY QUEEN) to fill in the blanks today!