Hi there, guys and dolls! Well, as September draws to a close and the autumn leaves begin to fall, I get to cozy up to do one of my favorite things, a Take 5 interview with one of my fellow Cozy Cat Press authors. Marlo Hollinger is a girl after my own heart, what with That Girl being such a fine, fine influence. Settle on in and get to know the author of CATERED TO DEATH, A Mid-Lives Crisis Mystery.

1. So tell me a little about your series and main characters. 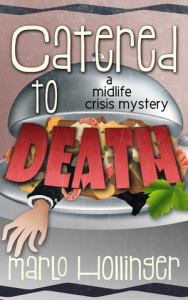 My series is called “Mid-lives Crisis” series and is about, surprisingly, a middle-aged couple, Steve and Dee Dee Pearson, who are still nuts about each other. Dee Dee has a case of the guilts because they are getting closer to retirement and she hasn’t really contributed all that much to the family funds. Since her kids are grown and she now has the time to work full-time, Dee Dee decides to find a job that will pay her well, give her something interesting to do and, most of all, give her the ability to kick in to the family retirement account. Unfortunately, Dee Dee immediately displays a talent for finding workplaces where murder is afoot.

2. What is your writing process like? Do you thrive on routine or work spontaneously as the whim takes you?

I would love routine but unfortunately my life doesn’t really allow for too much of it. I work in a school so during the school year I don’t have the time/energy to write as much as I’d like to. I try to write every day but fail at that almost every other day. Summer is better and that’s when I can really get a regular schedule going and stick with it.

3. What exciting moment or moments have made you realize that you were really an “author”?

Hmmm. I seem to have a bit of a Sybil-like existence when it comes to being an author. I’ve been writing for 25 years and have had seven books published but when I’m not in writing mode, it’s almost like everything writing/career related is happening to someone else. I love writing and I really love reading a positive review, but it’s like a cousin or a friend is getting the review and once I read it I tend to forget about it until I read it again. I’m not at all sure if that’s normal or not. Probably not.

4. What do you do to spark up your creativity when you feel the well of inspiration is running dry?

Sleep is very good as is very strong coffee when you get up. When I’m not feeling inspired I tend to take some time off until an idea pops into my head. A bigger problem for me is remembering those ideas and then actually acting on them. I dream of retirement or writing a bestseller (preferably the latter) and being able to write every single day without having to squeeze it in.

5. Who are some of your favorite authors and how do you feel they have influenced your desire to write?

I love Anne Emery, Betty MacDonald, Shirley Jackson, Mary Stewart, Irwin Shaw and I take a really guilty pleasure in reading Jacqueline Susann. Anne Emery wrote “teenage” books in the 1950s and 1960s and I grew up reading her and wanting to be as smart and have as much character as her heroines. Betty MacDonald is simply the funniest writer ever. Irwin Shaw had the ability to make his readers feel like they were in one of his books. All of the authors I love were able to take the reader by the hand and draw them into the world they’d created. I would love to be able to do that.

And I do believe you do, Marlo! Friends, be sure to give CATERED TO DEATH a read on your Kindle. I’m sure you’ll enjoy her story and people as much as I did. Till next week, kittens.