So What Have They Been Up To?

Hi there, guys and dolls! Today I was thinking about my darling Santa Lucia 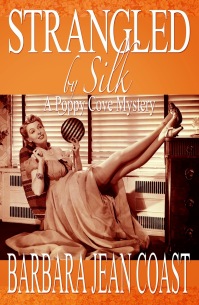 ns who are the heart of my Poppy Cove Mysteries, and wondering what they do when I’m busy running around and carousing about. They seem to have lives of their own – I just take it all down and maybe embellish a little.

It may seem kind of crazy, and yes I know that I make it up as I go along – heck, I’m already a pen name, so it’s not that far-fetched for you, is it? As I write my tales, I of course think about the plot, scenes and also how the characters act and react with each other. Who they are in the pecking order socially, their daily habits, their backgrounds, anything that plays a part in the story.

ut Margot and her designs, what are her influences and expressions, what she is drawn to create. How does her striving for independence work with the love she has for her darling Tom? And Daphne, she is very fun and carefree, but she’s realizing that’s not the case for everyone, and through their lessons, others learn things and she’s got a quest for knowledge and self discovery, too.

Loretta is a busy-body snoop, yet still loveable

and why is she so driven to uncover the stories of others? And what about her personal life? What brought her to Santa Lucia, away from Hollywood where she loved the glitz and gossip so much. Nancy’s a pain, and how does that affect her daughters? What does her mousy Barbara really think of it all?

At times, they all seem like real people to me. I think of them and wonder what they get up to without me. And then, what do they tell me and what do they keep to themselves? I guess it’s all part of life’s mysteries, or my Poppy Cove Mysteries, to be precise.

Thanks for being along for the journey.