Hi there, guys and dolls! My girls have great fun while doing research for my Poppy Cove Mysteries. Th

e fourth and current work in progress is set in 1959. I thought you might enjoy some of the fine advertisements of the time.

Why not start your day with a coat or two with a new lighter shade of lipstick? Sherbety shades, velvety vanillas and intriguing icings are just waiting for you. And doesn’t Suzy Parker look so alluring, just as you will, too. It’ll set you up to deal with this darling child. 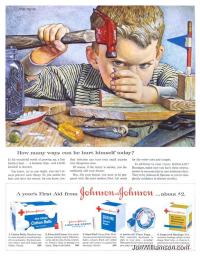 Now what mother hasn’t wondered that it’s been too quiet for too long, that child must be up to something? Of course, I’m not one to judge if you’re letting your child get into the wood shed where he really could inflict some damage (that’s what growing up in the ’50’s was all about, right?), but I’ll certainly say that you’d be right to have plenty of first aid supplies around.

Dealing with those trials and tribulations may make you want to get away from it all. Road trip, anyone? The ad says it all – dramatic! No point in

understating, if it’s Oldsmobile, it has to be a big deal.

Of course, nothing says more about a great escape than glamorous air travel. The luxury, the spaciousness, the lack of concern about turbulence and safety. It was the only way to fly, well the best way to fly, anyway.

you are there a refreshing drink on the beach is in order. They do seem like wonderful people, don’t they? Just like you, dear readers.

2 Responses to I’ll Buy That!