A Couple of Real Cozy Cats!

Hi there , guys and dolls!  This has been such a big year for yours truly, and it’s only going to get better in the years to come.  For those of you who have been following along, you know this is the year STRANGLED BY SILK was published by Cozy Cat Press, and I have been very hard at work writing the follow-up in the Poppy Cove series (getting there) and have a solid outline for book three coming to light.  In the meantime, I’ve been getting to know some of my new friends, and generally mingling my way through the cocktail party of life.  Over the next two weeks, I’d like to share with you some reviews that I’ve written over the past year of my fellow Cozy Catters.  In time, I’ll do more reviews as I continue the adventure of balancing my life in kitten heels. 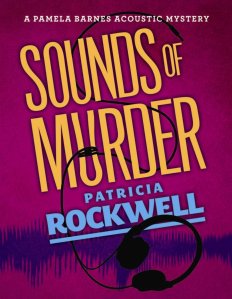 SOUNDS OF MURDER — Pamela Barnes is one clever gal with her ear to the ground and her understanding of sound! Anyone who dares to murder a colleague, even one who no one really cared for better be prepared to pay for their crime. This is an engaging and fast paced read, that had this mystery writer trying to guess “who-dunnit” all the way through. Loved all the characters, especially the delicious man that Pamela is married to. Let me tell you gals if yours truly were ever to wed, then a man like Rocky would be just the ticket, he can whip up a swell gourmet meal in the kitchen and is a romantic to boot. All this leaves time for Pamela to teach her classes, grade papers, attempt a discussion with her teenage daughter and most importantly of all, solve a murder. Will it be before she is in grave danger herself? Read and you’ll find out! I am already onto book two in this series and can’t wait to read more. 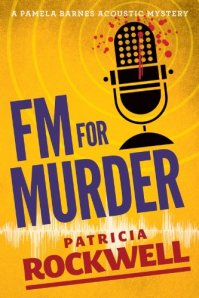 FM FOR MURDER — Patricia Rockwell serves up her second novel in the Pamela Barnes Series with an unexpected twist that yours truly didn’t even see coming. Of course that divine husband of hers Rocky makes more delicious meals and even helps Pamela in her investigation of the murder of a local radio station DJ. Really enjoyed this one and have learned a thing or two about sound along the way! Be sure to check this series out for it makes for a swell,and satisfying read.

VOICE MAIL MURDER — Patricia Rockwell had Barbara Jean perched on the edge of her seat from beginning to end of Voice Mail Murder, book number three in the Pamela Barnes Acoustic Mysteries. Pamela is drawn into investigating the murder of a beloved football coach in a local motel room involving a number of suspects who it appears he knew intimately.

Things get murky, suspenseful and twisted, taking the reader along for the ride with Pamela who is using her skills once again to aid Detective Shoop in untangling the voice messages to perhaps decipher some clues that will lead to the murderer before another death takes place and once again, Pamela finds herself in danger.

The delightful cast of characters appears once again including Pamela’s two best friends and that wonderful husband of her’s Rocky who once again is whipping up gourmet meals,being overly protective and looking after her needs. Read and enjoy, 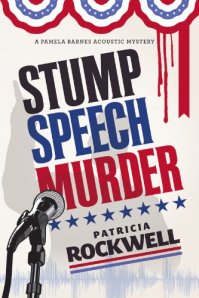 but be sure to keep the lights on and don’t stop reading until you feel safe!

STUMP SPEECH MURDER — Patricia Rockwell writes another murder mystery that had this gal wondering who was behind the dastardly deed?! A young candidate who is making a successful bid to become the Mayor of Reardon, that is until he is discovered holding the murder weapon over his wife’s dead body!

At the insistence of her best friend and colleague Joan Bentley,Pamela Barnes once again brings her acoustic expertise and her sleuthing skills to the investigation of Stacey Grant’s murder. I found the usual charming cast of characters such as Arliss, Jane Marie and her other colleagues at the University to be well written in this story. Of course any review of a Pamela Barnes mystery would not be complete without mentioning her husband the charming and loveable Rocky who looks after Pamela so well including cooking wonderful meals, surprising her with the most interesting bagged lunches and even taking the time to include a variety of teas in a thermos for her each day! This man is a dream come true to any gal who doesn’t have an interest in cooking but loves to eat! This gives Pamela plenty of time to work and solve murders too! I am really enjoying these stories!

The question in this particular case is will Pamela get the evidence to clear the candidate of the murder charges before it is too late or will he have to withdraw from the race? You’ll have to read and find out for yourself! 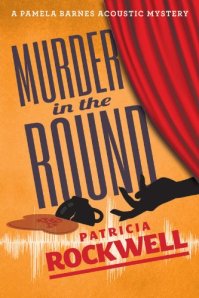 ROUND — This is another fun and suspenseful read from the pen of Patricia Rockwell! Pamela Barnes acoustic expert and amateur sleuth has taken her ruggedly handsome husband Rocky to Reardons’ community theater to see her best friend Joan Bentley in a production of The Importance of Being Earnest.

The young actress who plays opposite Joan in the opening scene chokes to death while on stage. What clues will Pamela use to solve Reardons’ latest murder and bring a killer to justice? Will Joan who is dramatic in her own life and on stage get the chance to perform her leading role or will it be curtains for the entire cast and their production? You will have to read this marvelous story to find out for yourself!

I am really enjoying this series and the cast of characters whose lives are unfolding on the pages of each book. Bravo Patricia! Can’t wait for the next one! 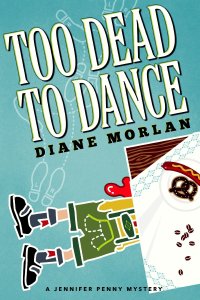 TOO DEAD TO DANCE — Here’s to you Diane Morlan for writing a delightful and fun mystery with small-town charm that is sure to keep readers coming back for more.

“Zicke, zacke, zicke, zacke, hoi, hoi, hoi” – A German toast that I’ll be sure to use at my next cocktail party!

Hermann Minnesota’s Polka Daze Festival is interrupted when Jennifer Penny local coffee roaster and entrepreneur stumbles onto a dead body at the local fairgrounds. When one of her best friends Sister Bernie is accused of the murder of a Polka band member, Jennifer soon turns to amateur sleuthing and meets the most handsome police detective that would have any girl weak in the knees. Will the Polka dancing, yodeling, and merriment continue or will the town and Jennifer see the end of Polka Daze? Darlings, you will just have to read and find out for yourselves!

SHAKE DOWN DEAD –Pour yourself a nice cup of coffee, and join in the hunt for a killer with coffee roaster turned sleuth Jennifer Penny who is one cool customer. This gal handles the investigation of a murder like a pro, even though her main squeeze is a police detective who I must say is one fine looking specimen of a man! Not only is murder involved in this second book of the series there is a blackmail scheme to boot! Plenty of dangerous twists and turns as well as baking cookies for a political campaign in this charming small-town story that will leave you guessing who was behind the death of social worker Whitney Wentworth and why they did the deed. Of course there is plenty of mayhem and mischief along the way to make this an enjoyable read. Bravo Diane!

Well, I hoped you enjoyed getting to know a couple of my favorite people’s works.  Check out their stories when you’re settling in for a good read.  You’ll be glad you did, I was.  Stay tuned for more next week.

2 Responses to A Couple of Real Cozy Cats!